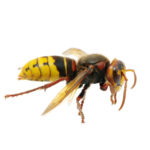 Hornets are the largest social wasps. Certain species of hornets can reach up to 5.5 cm (2.2 in) in length.

Hornets, like many social wasps, can mobilize an entire nest to sting in defense, which is highly dangerous to any human stung by such a volume of hornets. The hornet alarm pheromone is used to raise alarm of nest attack and to identify prey, such as bees. It is not advisable to kill a hornet anywhere near a nest, as the distress signal can trigger the entire nest to attack. Materials that come in contact with the pheromone, such as clothes, skin, dead prey, or hornets, must be removed from the vicinity of the hornet’s nest. Perfumes and other volatile chemicals can be falsely identified as pheromone by the hornets and trigger an attack.